This weekend, I drew my thousandth Daily comic.

Well, that’s not totally true. I’ve mentioned before that I tried doing a daily strip back in 2007, but I only kept it up for a couple of months.

And when I was in high school, I would do a haiku with a drawing before bed every night (usually they were about dreams I had, or how no one understands).

Regardless, as the number of Dailies crawled closer to the one thousand mark, I’ve been reflecting on the exercise– not only how it has affected my comics, but how it’s impacted my approach to work. This seems like as appropriate a time as any to write down some of those thoughts.

I’ve always romanticized the idea of doing something every day. Somewhere in my parents’ house I know there’s a box filled with diaries containing fewer than three entries in each one. (Note to my parents, if you’re reading this: stay out of any boxes you find containing diaries). 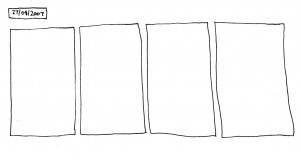 The thing is: I’ve always been lousy at keeping up these self-imposed exercises. I can do something if someone tells me to, but when I try to enforce my own deadlines and goals it used to be much more of a struggle. When I go back and read those strips from 2007, the primary theme seems to be one of frustration. There’s a lot of false-starts and self-chastising for forgetting to do strips, or for simply not being good enough. Like many young artists, my ambitions were much higher than my skill level.

When I started drawing daily strips again in 2010, it was more of an act of desperation. I was working a full-time office job to save money for school, and that left very little time to make comics. I was terrified that my development would come to a halt. With my only goal being to put pen to paper once a day, rather than to get published by D&Q immediately, the exercise seemed a little more manageable.

Almost three years later, The Dailies have become increasingly rewarding. It used to feel like an obligation, but it’s become something I get excited about almost every day. Almost.

Anyway, I’d like to share some of my thoughts on the act of keeping a daily strip, so here we go:

Ostensibly, I started this exercise for myself, hoping to become a better cartoonist. But I wouldn’t post them every week if I didn’t want people to see them. I can’t fully describe how much it means to me that people take the time to read my strips. Whether you read them every week, or have just read a strip or two here and there, I truly appreciate it.

See you next week.

The final strip from my 2007 attempt at a daily comic.