The Old Trout Puppet Workshop is performing The Tooth Fairy at Regina’s Globe Theatre, and I was lucky enough to get to do the related Prairie Dog cover illustration. 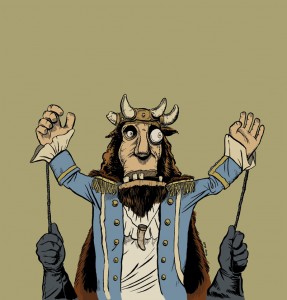 Old Trout brought Famous Puppet Death Scenes to the Globe Theatre a few years ago, and it was fantastic. I still think about it on a regular basis. One of my favourite vignettes was about the death of a whale, and it involved a large window with a massive eye slowly closing. There was no dialogue, only the gradual death of a creature of implied immensity. I’ve seen few things in any medium that have been so simultaneously simple and moving.

It made me want to run away and become a puppet maker, but for now I guess I’ll have to be satisfied to be a puppet drawer.

I’ve got my ticket to The Tooth Fairy and it already looks like it’s going to be just as memorable.