It’s been a while since I’ve posted something other than daily comics, so I decided to break that trend tonight.

I enjoy doing this stuff because I don’t have a lot of time for my own comics at the moment. I’m still working a full-time job until I make my trek to the Center for Cartoon Studies this fall (Note CCS’s spiffy new website!).

These covers make me feel like I’m still active as an artist … or at least an illustrator.

The editor overlord asked me to draw a dissected heart with lots of cross-hatching reminiscent of the drawings Andreas Vesalius. But honestly, I wasn’t really listening after he said ‘lots of cross-hatching’. I don’t cross hatch as much as I used to, but I still really enjoy it when situations call for it.

No, that’s an understatement. I love cross-hatching. Cross hatching takes me back to my late teens when I was first exposed to Robert Crumb’s work. I have a lot of happy memories of drawing comics until four in the morning, trying to hatch like Crumb. 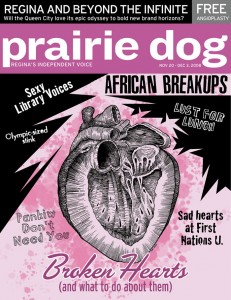 If you can guess to which species of animal it belongs, you will win … well, nothing. I don’t have anything you would want. But still, guess away!

The next cover was for International Women’s Day. Editor overlord wanted an image of Rosie the Riveter, updated for today, with doodle-art style tattoos that reference the 60s/70s feminist movement.

I’m not totally satisfied with the results, but it’s mostly due to small things like the figure’s line of action. The original image of Rosie the Riveter has a dynamic angle in her pose. I had to dampen it a bit so that the tiny men-relieved-by-feminism wouldn’t look cluttered. The finished product lacks some of the oomph of the original. Also, I didn’t really capture that defiant look in her eyes. 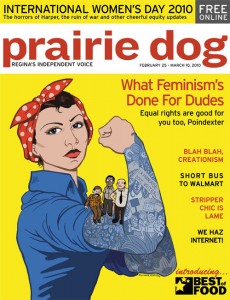 We are doing it

That’s all for this week. I’m going to be doing another Prairie Dog cover for next week … which may or may not be Hawksley Workman. We’ll see!

And if you’re really lucky (or rather, if I get off my ass, and onto an ass equipped with a computer), I’ll post my special Valentine’s Day comic that appeared in Prairie Dog.

Lovely to lovingly love your love…