There’s at least two other cartoon kids named Dennis that I can think of, and both of them are known menaces.

This Dennis isn’t, however. He’s just awkward about everything. 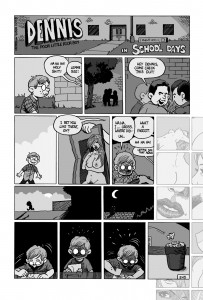 This may be going in the next issue Valuable Comics, although I’ve had a couple of comics rejected due to weiner/boob content before. Hey! That gives me a good idea! What if I post some of my dirty, rejected comics in a future post? Okay, Dakota, you have a deal.

Now that it’s finished, I’m not certain if I like this comic’s content. However, I’m still enjoying playing with interweaving/overlapping panels. I like the idea of side-strips, informing or affecting the primary narrative sequence. Working on this comic also gave me a chance to play with shading/colouring, something I’ve only started doing in the last year or two. Originally, I planned on shading the faded panels with a half-tone screen effect in Photoshop, but this looked too distracting.

My wife said that the darker panels look like a woman’s hourglass figure from far away … which was an accident that I’ll probably take credit for as soon as I forget that it was an accident.

Finally, a fun fact: While I was shading the woman’s nipples, my grandma called to talk for a bit. I would have stopped drawing, but I had to finish this comic tonight!