Mind the Gap! is a unique show. No exhibition in recent memory has attempted to provide such an expansive look at the art currently being made in Saskatchewan.

In a few weeks, the show will be closing, and preparations will be made for it to tour the province beginning in 2010.

Fortunately, the Dunlop also received funding to produce a catalogue for Mind the Gap!, which is a lovely object in its own right. 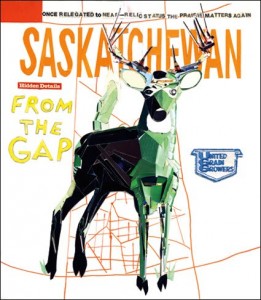 The catalogue provides some insight into the show’s background. Curators Amanda Cachia and Jeff Nye travelled all over the province meeting with some 70 artists, and it’s amazing that it didn’t take them longer than two years to put it all together. Nye’s essay also discusses some of the thematic links between the artists. There is certainly no ’school’ of Saskatchewan art, but the diverse work is definitely linked by the shared experience of living in one of the most confounding places around.

A number of writers were also commissioned to produce works of creative non-fiction, responding to several different highways in Saskatchewan.

There is also an overview of each artist, summarizing history and accomplishments, and reproducing images of their work.

Finally, the Mind the Gap! website was launched last week. The site contains some of the same content as the catalogue, along with links to the artists’ sites. Have a look here.

The catalogue is available at the Dunlop Art Gallery, where you can read it for free. Or, if your pockets feel heavy, you can buy a copy for $30.

Four Tall Tales: A Graphic History of the RPL was a very fun project, but even the most enjoyable projects aren’t without their controversies. Behold, as I reveal a potentially morally reprehensible image! 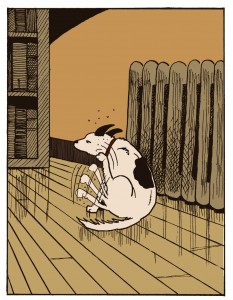 That's not so bad

Pretty innocent, right? Well, sure. Except for the fact that this was the original panel: 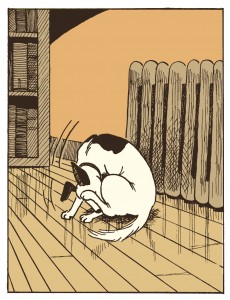 GASP! Think of the children!

Yeah. Someone at the library felt that a dog licking its crotch would offend some readers. I had some kind of lengthy, and possibly pretentious, statement about the dichotomy of high art vs. low art … but in the end it seemed like a petty point to argue. I felt bad for the curators at the Dunlop because they were very supportive and tried to offer me some ‘outs’ (i.e.: maybe the dog is just hiding his face?).

Still, an artist friend of mine found the whole controversy hilarious. If memory serves me, he said something like, “Who’s going to be offended by something you can see on the street, legally?!”

Oh well. If I ever become a famous artist, people will be begging me to make dogs lick their crotches. That’ll learn ‘em.

To close, here are a couple more pages from the comic. The story itself ended up tying together a number of moments in Regina’s history through a Wizard of Oz framework. I used to hate drawing buildings, but working on this comic made me love buildings … especially when I realized how many beautiful buildings Regina used to have before they started knocking them down in the name of progress. But that’s another post. 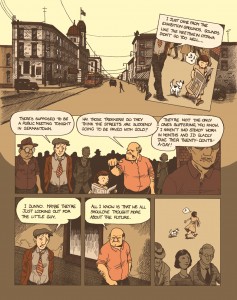 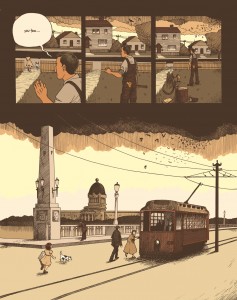 Four Tall Tales is available at the Dunlop Art Gallery in Regina for $15.